You have probably noticed that the developers of the Furzer Street precinct were able to keep both the car park entrance and exit open during the works to realign Corinna Street. There will, however be quite a lot of heavy truck movement over the next few days as they remove the very large pile of dirt from the site.

You may recall that we received an ACT Government Grant to develop a Social Ballroom activity in the Club by training up Club members to teach others to dance.

We are now offering our first tranche of classes. A four-week beginner/refresher level course on Foxtrot and Rhumba will commence next Tuesday, 16 February at 2pm in Hall 2. All welcome.

The 7.30am Wednesday morning Tai Chi class is no longer available. Tai Chi is on Thursday afternoons at 2 pm as usual.

Diana Gourley is running a special course at the Club: Researching Family History on the Internet. There will be an emphasis on: e-Resources on the National Library Website. We will begin with an introduction to researching your family’s history. Then you will learn how to search a range of Databases and Digitised Newspapers. You must have good internet skills & good general computer skills.

If you are interested put your name & other details on the computer noticeboard. Any questions? Phone the office.

There are places available in the Wellbeing Course run each week at 9.30am on Thursday mornings, the following speakers are presenting on these topics:

St John ACT is offer free occasional first-aid information sessions for retirees/seniors on various topics. The sessions book up quickly, the next one is available on Wednesday 4 May which is on heart attack, stroke, burns and anaphylaxis. For more information is ring 6282 2399. The address is 14 Thesiger Court, Deakin.

Two years ago Voci Stupede, a not for profit organisation presented a wonderful concert of Operatic Recitals at Woden Seniors. 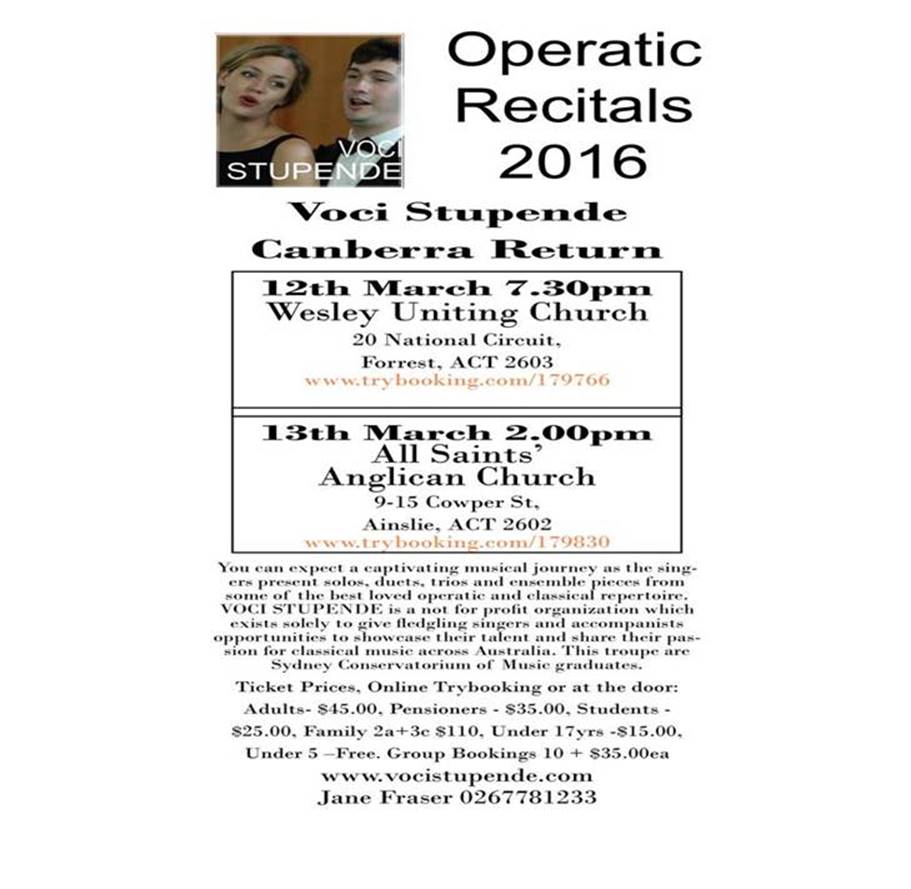 The Spiral Photo Album gives a good sense of who we are and what we do – true to the saying that a picture is worth a thousand words.

Spiral is now in its 47th year of supporting/ entertaining some of Canberra’s senior citizens. Our ‘members’ range between about 60 and 95. We meet at the St. James Uniting Church in Curtin each Thursday from 10.00 am till midday. Some people get themselves there but we can sometimes offer a pick up (and deliver) service to people in inner south Canberra.

We offer morning tea/ coffee with homemade cakes/ biscuits/ sandwiches followed by some form of entertainment. Usually this is a guest speaker, sometimes a musical performance and occasionally we go for a picnic or a bus trip. The Church generously supports us by providing the hall at a nominal rental. We have no fees but we do charge 50 cents contribution to costs. We are non-denominational and we welcome people from a varied background of occupations and origins.

Location and time. The Uniting Church is the cream coloured hall opposite the Curtin shops (the other side of the pedestrian crossing). It is best approached from the car park off Gillies Street. We arrive at 10.00. Morning tea is served between 10.10 and 10.45. While the washing up is done we remove tables and reconfigure the venue for the guest speaker who starts at about 11.00. Our aim is to be finished by midday.

National Gallery of Australia curator Simeran Maxwell will join us to tell us about the very successful block-buster Tom Roberts exhibition now on.

Richard Gray AM from COTA will provide a “fun and interactive information session” for older Canberrans. You will learn the advantages and the challenges of being an older driver, road safety and pedestrian safety tips, how to transition from a driver to a non-driver, travel and transport options and concessions for seniors and where to go for further help or information.

17 March Renee Osterloh from the National Zoo and Aquarium

Renee, the Visitor Experience Manager, has seen what was a small wildlife park grow into a national and international success. She will tell us about the recent addition of accommodation in the Jamala Wildlife Lodge.

Kathryn Heuer is a founding partner of Certus Law, a former Registrar of the Family Court, has been practising family law and estate planning for over 25 years. Kathryn will talk about how the role and the work of lawyers has changed over the years and is capable of answering any questions you might have.

The first of two performances from the always popular David, Jim and Robin with Margaret at the piano playing a wide range of music and song.

I can confirm that URoC (the ukulele orchestra) will return on May 12 and also the Canberra Mandolin Orchestra (date to be confirmed).

The ANU Film Group’s new programme for Semester One 2016 has just been announced. The first screening of the year was on Monday 8 February.

You can view the programme in its entirety, complete with reviews, on our website right now or download a PDF version of it here. Something for everyone amongst the 87 films – from the latest Hollywood hits to foreign and independent films not seen elsewhere, as well as a selection of beloved classics, documentaries and more for the family.

For those of you who know all about us and were just waiting for confirmation of the line-up head over to www.anufg.org.au/join to purchase your membership for this year now. Membership fees are unchanged at $40 per semester or $70 for the year. Joining online will have your membership cards pre-laminated and will save you time.

For anyone else, let me introduce you to this wonderful film society which will be celebrating its 50th anniversary this year with a number of special events. Membership is open to all, there is no requirement to be a student or an ex-student. We use professional digital cinema and a six-channel Dolby Digital surround sound system – the same type of equipment used in commercial theatres. We screen all our films in the 370-seat Coombs Theatre, on an 8.5 metre wide screen, one of the largest in Canberra.

Some of the fantastic benefits of the Film Group are: three guest passes per semester, free parking nearby, films start on time (no adverts, no trailers) and you can bring along children under 16 years free of charge. You also get a comprehensive booklet of member-written reviews which may tempt you to see films that you haven’t heard of but may end up being amongst the best you will see all year. Believe me, it happens often.

To whet your appetite let me mention a few of the films on between now and July 16. On May 21 we have a very special Q&A presentation of Sherpa, an award-winning documentary with Canberra-born-and-bred director Jennifer Peedom. From France we have The Belier Family which has had the best reviews that I’ve seen. A Pigeon Sat on a Branch Reflecting on Existence and The Lobster are quirky comedy-dramas from Sweden and Ireland. As usual, we have all the blockbusters like The Danish Girl, Suffragette, Spectre, Spotlight, Carol and The Big Short. We’ve even got The Good Dinosaur and The Peanuts Movie for you parents and grandparents (it is not compulsory to bring kids with you). Anomalisa is an animated “important” film, one of those that I probably wouldn’t see commercially but I won’t miss when it comes to Coombs.

Coombs Theatre (behind the National Film and Sound Archives) can be a little difficult to find the first time, but is much easier the second time around! I promise it is well worth the effort and I have no doubt that you won’t regret it. Please share this with family and friends, we are welcoming new members right now.

You will find Maureen in Club on Tuesdays & Thursdays between 10.30am and 2pm for Justice of the Peace matters.