There will be only one entrance to the Club car park over the next two weeks as work progresses on realigning Corinna Street. Entering and exiting the car park will be through the existing entrance. Please enter through the existing entrance and travel in an anti clockwise path around the club so that you drive past the container as you leave the car park.

You may recall that we received an ACT Government Grant to develop a Social Ballroom activity in the Club by training up Club members to teach others to dance.

We are now offering our first tranche of classes. A four-week beginner/refresher level course on Foxtrot and Rhumba will commence next Tuesday, 16 February at 2pm in Hall 2. All welcome.

Vacancy – Brush Up on Email, Internet and Word Processing Course

Diana Gourley is running a special course at the Club: Researching Family History on the Internet

There will be an emphasis on: e-Resources on the National Library Website.

We will begin with an introduction to researching your family’s history. Then you will learn how to search a range of Databases and Digitised Newspapers.

You must have good internet skills & good general computer skills.

Two years ago Voci Stupede, a not for profit organisation presented a wonderful concert of Operatic Recitals at Woden Seniors. 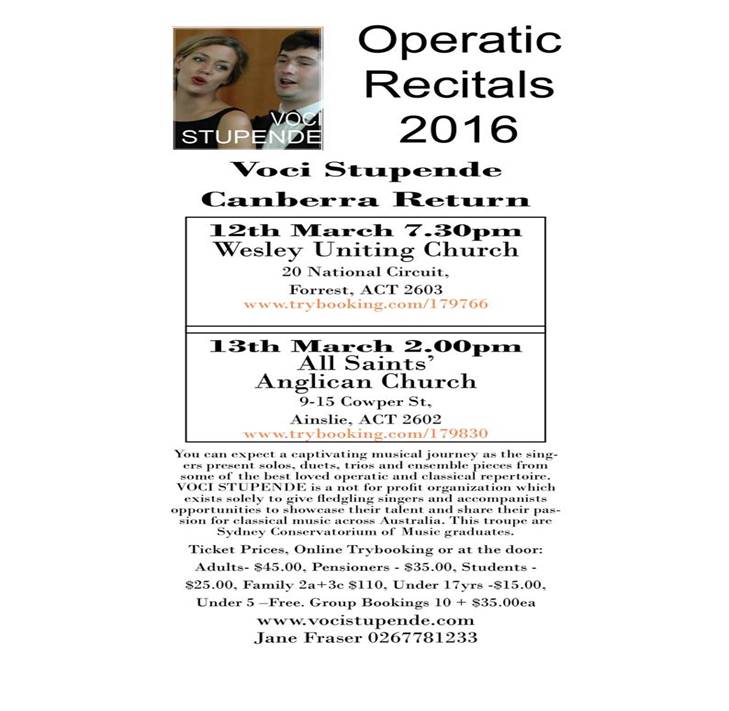 We have a program of repainting throughout the Club in 2016 as funds permit. Hall 2 has recently been repainted. We are looking for someone that can sew some new covers for the long seats under the windows on the western side of the hall, we will provide the fabric.

The ANU Film Group’s new programme for Semester One 2016 has just been announced. The first screening of the year was on Monday 8 February.

You can view the programme in its entirety, complete with reviews, on our website right now or download a PDF version of it here. Something for everyone amongst the 87 films – from the latest Hollywood hits to foreign and independent films not seen elsewhere, as well as a selection of beloved classics, documentaries and more for the family.

For those of you who know all about us and were just waiting for confirmation of the line-up head over to www.anufg.org.au/join to purchase your membership for this year now. Membership fees are unchanged at $40 per semester or $70 for the year. Joining online will have your membership cards pre-laminated and will save you time.

For anyone else, let me introduce you to this wonderful film society which will be celebrating its 50th anniversary this year with a number of special events. Membership is open to all, there is no requirement to be a student or an ex-student. We use professional digital cinema and a six-channel Dolby Digital surround sound system – the same type of equipment used in commercial theatres. We screen all our films in the 370-seat Coombs Theatre, on an 8.5 metre wide screen, one of the largest in Canberra.

Some of the fantastic benefits of the Film Group are: three guest passes per semester, free parking nearby, films start on time (no adverts, no trailers) and you can bring along children under 16 years free of charge. You also get a comprehensive booklet of member-written reviews which may tempt you to see films that you haven’t heard of but may end up being amongst the best you will see all year. Believe me, it happens often.

To whet your appetite let me mention a few of the films on between now and July 16. On May 21 we have a very special Q&A presentation of Sherpa, an award-winning documentary with Canberra-born-and-bred director Jennifer Peedom. From France we have The Belier Family which has had the best reviews that I’ve seen. A Pigeon Sat on a Branch Reflecting on Existence and The Lobster are quirky comedy-dramas from Sweden and Ireland. As usual, we have all the blockbusters like The Danish Girl, Suffragette, Spectre, Spotlight, Carol and The Big Short. We’ve even got The Good Dinosaur and The Peanuts Movie for you parents and grandparents (it is not compulsory to bring kids with you). Anomalisa is an animated “important” film, one of those that I probably wouldn’t see commercially but I won’t miss when it comes to Coombs.

Coombs Theatre (behind the National Film and Sound Archives) can be a little difficult to find the first time, but is much easier the second time around! I promise it is well worth the effort and I have no doubt that you won’t regret it. Please share this with family and friends, we are welcoming new members right now.

You will find Maureen in Club on Tuesdays & Thursdays between 10.30am and 2pm for Justice of the Peace matters.