Table tennis anyone?  Just reminding you that there is an active and social group that play table tennis in Hall1 on Wednesday and Friday mornings from 9.30am to 12.30pm.  All skill levels welcome.

The ACT Government’s Respecting Patient Choices Program is sponsoring a series of “play’s” (they are free to attend to the community) on the 19th and 21st of May.  The Play’s are designed to facilitate community conversation about death, grief and living.  Four Funerals in one day is based on real people’s stories and is an entertaining and inspiring performance. 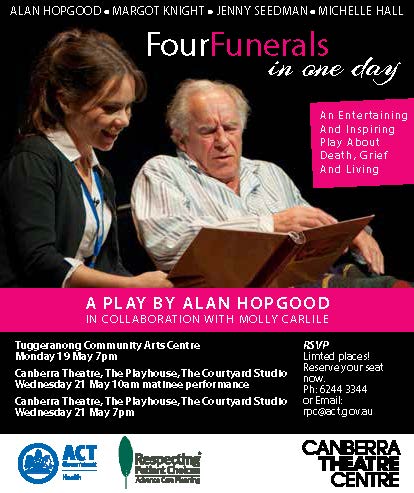 The sessions are being held in various locations in May.

A light morning tea will be provided.  RSVP is not required but would be helpful for catering purposes.  RSVP: rpc@act.gov.au or phone 02 6244 3344.

The ACT Office for Ageing, in partnership with the Arc Cinema, National Film and Sound Archive, present the ‘Silver Screenings’ Film Program, which is due to commence in June 2014 and conclude in early October 2014.

Silver Screenings aims to provide a quality cinema experience for mature audiences, within a fully accessible cinema at an affordable price – just $6 per person, allowing greater numbers of Canberrans to participate and experience the joy of film.

The Silver Screenings Film Program will run on Friday afternoons, from 2.00pm, in the period June to October 2014 at the Arc Cinema of the National Film and Sound Archive, Ellery Circuit in Acton.

Many of the films selected for the Silver Screenings Film Program are recent cinema releases that have received critical acclaim and considerable box office success.

Film screening dates, timings and film information can be obtained from early May by checking out the Arc Cinema website at nfsa.gov.au/arc or by contacting the Arc Cinema booking office on 6248 2000.

You will find Maureen in the Anne Murray room on Tuesdays between 11.30am and 2pm for Justice of the Peace matters.

We are still looking for books, this is an ideal opportunity to clear out those book shelves safe in the knowledge that they are likely to go to good homes.  The Club will be holding a three-day book fair over the weekend of 8-10 August 2014.  We will also be selling cakes, jams and other goodies and offering morning and afternoon tea.  We might also have a bit of singing.

Thank you to all those that have already dropped books off at the Club.